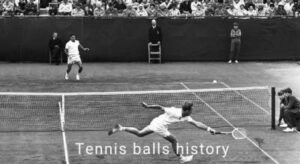 The history of tennis ball goes long back to the 12th century & historians believe that it originated from Northern France. “Tennis” comes from the French word “Tenez (pronounced ‘Teney’) which means simple start or ‘take up position’. A thousand years ago, monks originally played tennis when the racket was flat on the hand & the balls were wooden.

Several tennis history facts are available as the exact information on tennis ball origination differs from various sources. That’s why in this article, we would discuss the history of tennis balls from different perspectives for better understanding. Let’s Check out!

In the 12th century, the tennis ball gameplay was named “Jeu De Paume” which means ‘game of the palm’. Later in the 16th century, the racquet/racket came to use instead of the palm of hand & the game began to be called Tennis. Henry VIII of England was one of the biggest fans out there of this game, also it was popular in France & England too. It was referred to as Real Tennis at that time.

During the first days of the French Revolution, the Tennis court oath (French – Serment du Jeu de Paume) was a pivotal event & an oath taken by the French Third Estate. Originally many tennis courts out there, including at Oxford, Hampton Court Palace, Falkland Palace of life, Cambridge. Mary Queen of Scots regularly used to play at Hampton Court Palace. 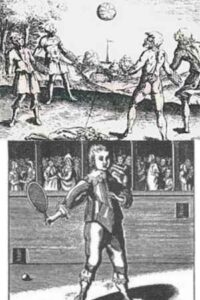 576 members pledged the oath of the French Third Estate out of 577 in a meeting of the Estates-General on 20th June 1789. From there, the term Tennis was thought to derive from a French word ‘tenez’ that means ‘take heed’. It’s a warning from the server player to the receiver.

What is a Tennis ball made of? Charles Goodyear, a self-taught chemist started a quest to make natural rubber into a durable & stable product. While working with East India Rubber Company, Goodyear combined rubber & sulfur on a hot stove accidentally. But the rubber didn’t melt, it started hardening when the heat was increasing.

Charles Goodyear received US Patent No. 3,462 in 1844 after perfecting the vulcanization process.

Marketed by Major Wingfield, the first tennis sets included vulcanized Indian rubber balls too. But the balls were not suitable on grass courts as it lacked enough bounce & the color was grey or red.

English barrister John Moyer Heathcote started using flannel as a cover around the rubber tennis ball. This cover improved the playing properties of the ball & the wearing. As a result, the tennis ball became more visible & compatible with the grass turf. 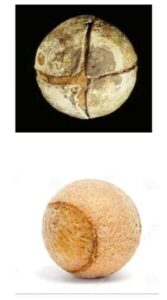 John Moyer Heathcote was credited for devising this procedure.

The history of lawn tennis goes back to the 1874s. Lawn Tennis rules were published by Major Walter Clopton Wingfield first. The rules booklet was entitled Sphairistiké (Greek for lawn tennis), also known as ‘Book of the Game’. The original racquet sport ‘real tennis’ was replaced by ‘Lawn Tennis’ which the modern game is derived from.

Since the use of Flannel, the covering of the tennis ball has moved on.

In the 2000s, a new invention (US Patent No. 6,508,732) of cover using phosphorescent impregnated fiber has made the tennis balls ‘glow in the dark’.

This has solved the problems of lack of visibility in low light conditions and at dusk for the conventional yellow tennis ball.

Around 300 million tennis balls are in production every year. To reduce the environmental impact of these balls slow decomposition, constant searches are going on.

Royal Parks Foundation launched an eco-friendly Tennis Ball in 2015 that is a great example of an environment-friendly product.

The International Tennis Federation (ITF) has approved this pressureless ball by Royal Parks as environment-friendly balls.

Tennis history and rules go back centuries ago. In 1888, the Lawn Tennis Association (LTA) was founded to maintain the standard of tennis & new rules. Nowadays, tennis rules are approved by the International Tennis Federation (ITF).

Ans – It’s a game where four-player or two-player strike a ball with a racket over a net stretched in the middle of the court. Lawn tennis is played with a felt-covered rubber ball on the clay, or grass, or artificial surface.

Ans – A tennis court is a venue that is a firm rectangular surface where players play the sport of Tennis. A low net stretched across the center of the court. It can be used for singles or doubles matches.

Ans – A tennis ball is a ball for playing the sports of tennis. Usually, it’s a fluorescent yellow color at major tennis events, but it can be virtually any color for recreational play.

The history of tennis ball goes back over centuries. Over time, this gameplay evolves into our modern day’s tennis ball gameplay. This ball has changed its shape, size, color & materials of making, but the gameplay of tennis remains almost the same as before.

New rules are implemented from time to time, as well as standardization too.

After reading this article, we hope you got a clear understanding of Tennis Ball’s History & how it came into the 21st century. So, Good luck with your learning!

why are tennis balls pressurized

how much does it cost to restring a tennis racket

what is a walkover in tennis

how to practice tennis alone

how to wash tennis shoes

whats in my tennis bag

how to play tennis in cold weather