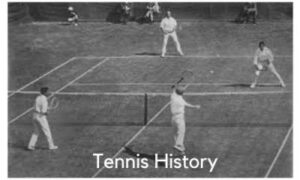 The history of tennis is not an easy thing to find out. This game developed with evolution and lots of change. Yeah, we are talking about the racket sport; traditionally people call it lawn tennis.

The tennis which you usually call it is the descendants of the lawn tennis. History of tennis indicates how traditional and old the game is. It seems not easy to delineate and summarize the tennis history facts in straightforward. That’s why we will talk about the different phases of the history of tennis.

Back in the 12th-13th century, a game named jeu de paume (game of the palm) was prevalent in France. This game had a significant difference between modern tennis. They would hit the ball with a bare hand in the 12th century, and later in at 13th century, gloved hand replaced the place of an empty hand. On the verge of the 16th century, the gloved hand substituted by the racket. 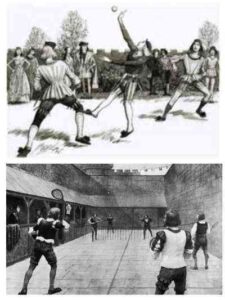 Many people say that in at 11th and 12th-century French monks used to play the game jeu de paume against their monastery walls or a rode strung across the courtyard. Some claim the word tennis came to form French word tenez, which meant “take this.”Over time, these tenez were more popular among the French people, but still, everyone used to play the ball against the walls.

Then gradually, the bare hand was replaced with gloves with webbing between fingers. Near the 16th century, racket took place the glove with a handle. This is how the history of tennis rackets started.

But the balls are made from the wad of wool, hair, cork warped in string and leather or cloth. There were no rubber balls. Before introducing with a rubber ball, the hand-stitched modern baseball like the ball was so popular. Still, the rubber ball we know as a tennis ball was more than 100 years away, we knew from the history of tennis ball.

Over time, the ancient game was popular in Britain as real tennis, Court tennis in the USA, and royal tennis Australia. In Britain, tennis was known as lawn tennis because the royal people of the Victorian Era played it on grass court that we came to know from the history of tennis courts.

During the mid-18thcentury, in 1870, the game was codified and structured in England. But there was prevalent in women’s tennis. They dress long sleeves. If you want to go through the tennis history timeline, it would be incomplete without the name of Charlotte Cooper. She was probably among the players who started to carry a service by throwing the ball on the air that we used to see in modern tennis.

In 1880, tennis was more popular than any other game. That decade was dominated by the twin siblings William and Ernest Renshaw. In the history of the tennis timeline, their names will be written in gold forever. They both met three times in the Wimbledon singles championship. 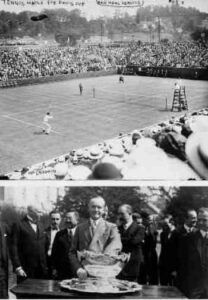 If we see back, the Davis cup was the first international team competition. Then it was called the International Lawn Tennis Challenge Trophy. Great Britain challenges the USA in the first year but was defeated by them. But in 1902, Doherty brothers represented Great Britain well-enough in the USA.

They used rubber ball on the grass, but other surfaces came forward soon enough. Before introducing concrete and acrylic surfaces, tennis used to play the hardwood floor.

Just before the Open Era, professional tennis players used to play head to head than tournaments because they could earn much more number where the tournament wanted to pay much less. Here is an example of it. Fred Perry earned $91,000 today’s $1,618,410 in 1937, where his rival was North American Ellsworth Vines. But when Fred Perry earned only $400 U.S today’s $8,173 when U.S Pro Tennis Championships.

You will get a complete scenario about then if you see how Vines played that time. Vines didn’t join any tournament between 1937 to 1938. On the contrary, he played 70 matches on two tours at this time.

Even in the Mid-19th century, the professional player felt comfortable to play tour matches. Ken Rosewall Played 76 games in only five months on tour against Pancho Gonzales. From 1960, professional tournaments started to become more significant than tours.

Women’s professional tennis was going parallelly with men. In 1926, women professional tennis begun. The number one Suzanne Lenglen took 50,000 challenge series of matches where her oppU.S.ent was a three-time US champion, Mary K. Browne. The series ended the following year, but professional competition between women was taken aback until 1941.

From 1968 open era did start its journey when Grand Slam tournaments allowed armatures to compete with professional players. Before then, in tennis history, amateurs were allowed to play with professionals in Grand Slam tournaments and other events sanctioned by the ILTF. But the initiEraErajourney of the open era wasn’t that easy. There was trouble between commercial promoters and ILTF.

As a result, the Grand Slam tournaments got boycott. British Hard-Court Championships was the first open-era event in 1968 at The West Hants Club, Bournemouth, England. And the first Grand Slam was French Cup held that Era in May month. Open Era allowed players to make a living by playing tennis.

Here you have known a short, slim but brief history of tennis. There have many things to know about tennis history, rules of tennis and when was tennis first played. The history of tennis shoes is deep, like the games too. Everything related to this sport has a brief history. As a player and sports lover, we all should know how a sport first originated.

How to Play Tennis in Cold Weather

How to Practice Tennis Alone

why are tennis balls pressurized

What’s is in My Tennis Bag